The force limiting clutches from mayr® power transmission protect linear movements. As soon as the pre-set force is reached, the linear safety clutches immediately interrupt the power transmission. The clutches safeguard against both tensile and compressive overloads. Due to the mechanical operating principle, the interruption occurs extremely quickly and is autonomous to the electrical control system. The linear coupling transmits forces backlash-free and ensures stability due to its high axial rigidity. 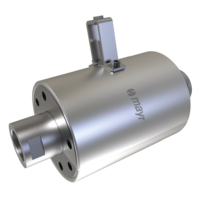