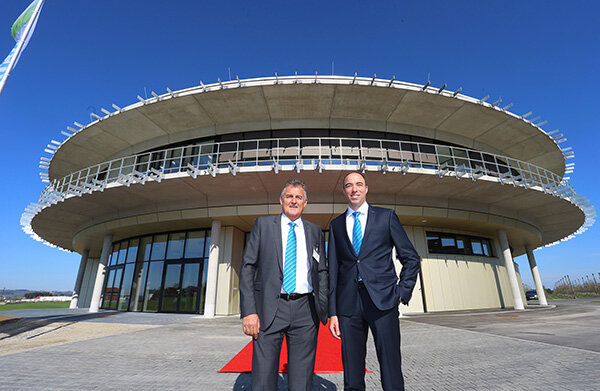 With its roots in the Allgäu region and its branches all over the world – Mayr power transmission is emphasizing its commitment to the location in Mauerstetten through the new mayr.com Communications Centre, and at the same time is manifesting its international orientation. On Wednesday, 18 April 2018, the new, sophisticated circular building was officially opened in the presence of numerous invited guests.    “With the new mayr.com Communications Centre, we are creating a meeting place, a location for direct communications from person to person, in contrast to the increasingly anonymous communications via the Internet and social media”, explains Senior Managing Director Fritz Mayr. The name “Communications Centre” has been consciously selected, to delineate between it and a technology or training centre. “This is about the mutual appreciation inherent in personal, direct communications, which create stability and generate trust”, emphasises Fritz Mayr. This understanding of the term communication is also expressed in the circular form of the new building. At the opening ceremony, the approximately 140 invited guests from the fields of politics, economics and science as well as representatives from the surrounding municipalities and schools were visibly impressed by the successful, representative new construction.  An important, grounded employer in the East Allgäu region “A further objective which we are pursuing through mayr.com is the integration of the Mayr company within its surroundings”, adds Fritz Mayr. “We feel very closely linked with our surroundings, our employees and the people within the region”. The fact that the renowned family-run company is an important and grounded employer in the East Allgäu region was also emphasized by District Administrator Maria Rita Zinnecker within the scope of the podium discussion. And Armin Holderried, Mayor of the community of Mauerstetten, added: “We are proud to have a global player in the community with Mayr power transmission. We experience the company as a strong partner and reliable employer, which is structured in a stable and future-proof manner.” Mayr power transmission’s special feature as an employer is its orientation as a family-run company. The Mayr family has stood behind the company since its foundation in the year 1897 – and is now in its fifth generation. Ferdinand Mayr, the grandson of Fritz Mayr, has meanwhile become a shareholder and member of the Executive Board. “We consider our company with all its employees as a grown Mayr family”, explains Ferdinand Mayr in his welcoming address. “For us as the owner family, it is important to be present within the company, to co-design its future and to actively implement our values. Our employees worldwide can rely on this.” Angelika Schorer, representative of the Bavarian Parliament, also honoured this commitment and thanked the Mayr family for running the company with vision and innovation. With its roots in the Allgäu region and its branches all over the world “Through the mayr.com building, we are creating a space for the design of our communications”, says Ferdinand Mayr. “Communication represents bonds and connections. And connections or networking are also the key words for the challenges inherent in modern industry. It’s all about the networking of productions, machines, processes and also the people – and this on an international scale. The new building represents all of this. Here we will in future be communicating, for example, with customers and partners, pupils, students and our own employees. The key words here are knowledge and learning, as further training represents an investment in our future due to today’s fast-changing requirements and markets. With the new Communications Centre, we are strengthening our international connections at the same time as we are strengthening our headquarters in Mauerstetten. And of course this also includes our new, 4,500 m2 assembly and logistics hall, which was put into operation in 2017. Through this major location investment, we are able to cope with the challenges of digitalisation advancements. At the same time, we fulfil the growing market requirements for outstanding logistics. We are already well set-up today and are looking forward to designing our future creatively”.    Strong international structures Günther Klingler, the Managing Director of Mayr power transmission, emphasised in his address stability, reliability, innovation and continuity as the supporting columns of the company: “Since its foundation in the year 1897, the company has secured the movements of this world with their innovative products”. The international orientation of Mayr power transmission was also expressed during the welcoming address by Yu Wang, the Managing Director of Mayr China in Zhangjiagang near Shanghai. “Mayr power transmission is the market leader in mechanical power transmission, and works together with internationally leading companies.” The company is active in over 60 industry sectors worldwide, and has in total over 1,200 employees. In addition to Mauerstetten, Mayr power transmission operates two further production plants in Poland and China, and features a global structure with its sales subsidiaries in the USA, in France, Great Britain, Italy, Singapore and approximately 40 additional country representatives. The International Sales Meeting attended by over 50 participants, which took place subsequent to the opening ceremony as one of the first events in the new mayr.com building also reflected this orientation.