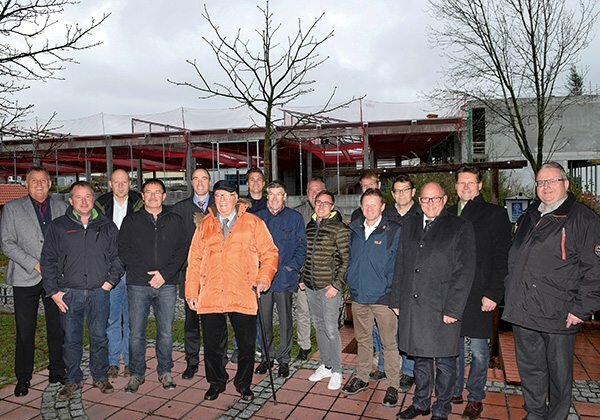 Grateful for the smooth construction process, the building owners, Mayr power transmission, and the executing companies celebrated the roofing ceremony of the new production and assembly hall. As planned, the hall will be covered over before the winter. Since the ground-breaking ceremony seven months ago, much has happened on the construction site of the new production and assembly hall at Mayr power transmission in Mauerstetten. In the meantime, the construction shell has been completed, as has the steel construction for the saw-tooth roof construction. Currently, trapezoidal sheets are being installed on the hall roof and the roof of the office building attached to the hall has already been sealed. Reason enough to celebrate! Therefore, the roofing ceremony for the new Hall 7 took place in November in the presence of numerous representatives from the companies involved in the construction. Christoph Kalcher, from the Dobler construction company, conducted the traditional roofing ceremony address and blessing to the guests who were present from the roof of the office building. “We are grateful for the smooth construction process,” added architect Thomas Traut from Marktoberdorf. “As a result, it has been possible to cover the hall according to plan before the winter.” Over the winter months, the interior construction will take place, so that it will be possible to move into the new hall by approximately mid-2017. Long-term safeguarding of the location in the Allgäu The new, modern production and assembly hall, which is being created to the north of the existing company complex beside the restaurant “Sonnenhof”, has a length of 105 m and a width of 45 m. It therefore occupies a total floor area of approx. 4,500 m2. In future, the Assembly and Dispatch and a warehouse position close to Assembly will be located in the new hall. Approx. 600 m² office area and appropriate meeting, break and engineering rooms have been planned in the head end of the building. Mayr Power transmission is investing heavily in its Mauerstetten location with this new production hall and with the construction of the new Communications Centre currently simultaneously being built on the premises, which is located to the west of the existing administration building in the Bahnhofstraße. “With these new buildings, we are responding to the continuously-increasing challenges and are equipping ourselves for the future,” explains Mayr CEO Günther Klingler. “As the market and technological leaders, Mayr power transmission has a pioneering role in the market, and this should also remain so in the future.” Since its establishment in 1897, the family-run company has been strongly anchored in the region. However, besides this strong bond with the Allgäu, Mayr Power transmission is also today a globally-active company with over 1000 employees. Mayr power transmission is active on-site in all important industrial areas of the world, with plants in Poland and China, numerous sales offices and national representations around the globe.